Yes, I know. The summer solstice has come and gone…old news, weeks ago, long since moved on. That’s the way it is with me…a little late, after the fact, better late than never. It has taken several years for me to come to terms with that, to accept it and embrace it, but I am at peace now with my belated and not-so-punctual ways. And now that Summer is in full-fiery-force, I am revisiting a few precious moments of celebration as we welcomed this new season with two of my favorite things: a sunset and a starry sky. From a tent, by a lake, with a waterfall, no less.

It was perfect, except for the mosquitoes. Those were awful, but we’ll overlook that for now. We hit the trail at Lake Sabrina, just outside Bishop. Our destination was Sailor Lake. The goal, to capture the Milky Way from this picture-perfect locale. Sabrina Basin is beautiful in early summer, one of my favorite places for Sierra wildflowers, as they are always abundant. The trail was lined with aspens sporting their brand new lively green leaves. Squirrels paused for photos as we sauntered by. I tell you, aspen-lined trails + wildflowers + little critters = one happy hiker. 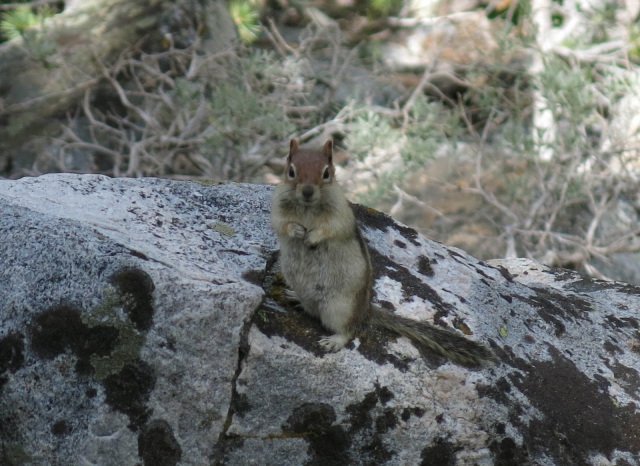 It felt so good to be on the trail again. It was officially the first day of summer and I was enjoying my girlish delight. It was so lovely and promising until we began to realize that the sky was…a little overcast…hmmm…very overcast, actually. As we hiked further up the trail it began to seem less likely that Milky Way photos would be an option, though we tried to remain hopeful. You never know what those clouds will do…right? 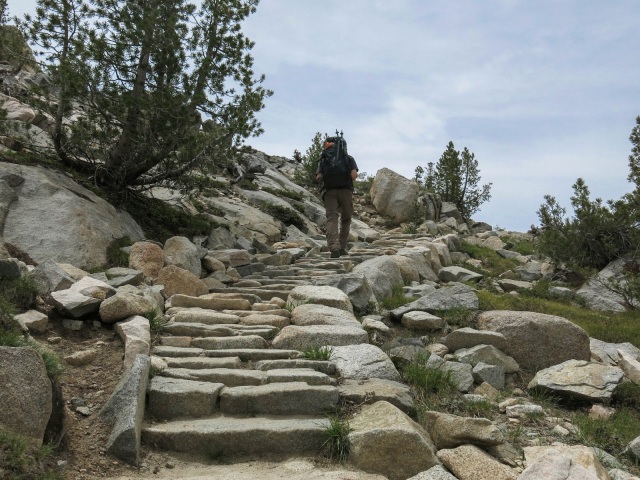 As the day moved on and the cloud cover lingered, disappointment slowly began to set in. The packs felt heavier this trip, the trail a little longer. This hike in was almost twice as long as our last backpacking photo trip, the investment a bit more. Hubby really had his heart set on a clear view of the night sky. Heck, at this point he was thinking even a cloudy view would suffice, as long as he could get a little glimpse of the heavens. Just give the boy some stars and he would be content.

By the time we reached Blue Lake we were feeling ready to ditch the packs, but we still had a few lakes yet to go. We were tired, starting to ache, feeling discouraged and the mosquitos, sensing our vulnerable state, suddenly launched an attack. They were voracious, rapacious, ferocious and they would not let up! I know those mosquitos have their place in nature, but we found the barrage quite offensive. I actually resorted to applying that awful bug spray, just to get some peace. Hubby held out and we hustled on beyond Blue Lake, then Dingleberry and eventually we made it to Sailor Lake. 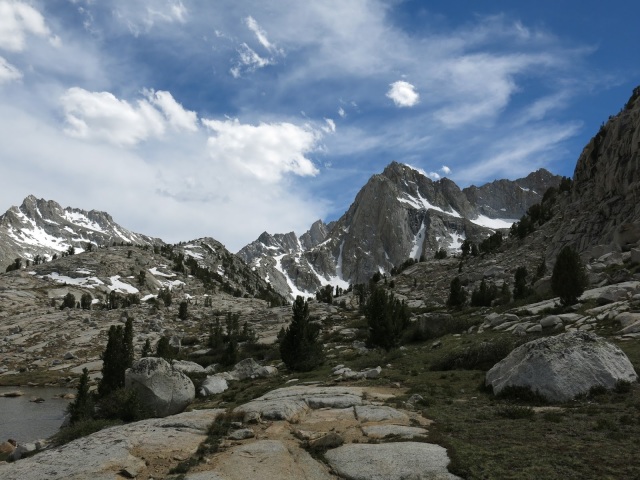 We were feeling annoyed at this point. But as the trail led us closer to our destination and that majestic granite peak came into view, we couldn’t help but relax a bit (as did the mosquitos) as we reveled in the beauty of our surroundings.

Picture Peak. Isn’t that a befitting name? It certainly made for a picture-perfect campsite with that striking granite mass rising above the meadow-lined shores of Sailor Lake. We had the area to ourselves (except for the mosquitos, of course) and we spent the rest of the day setting up camp, exploring the area, taking photos and simply enjoying the summer solitude. 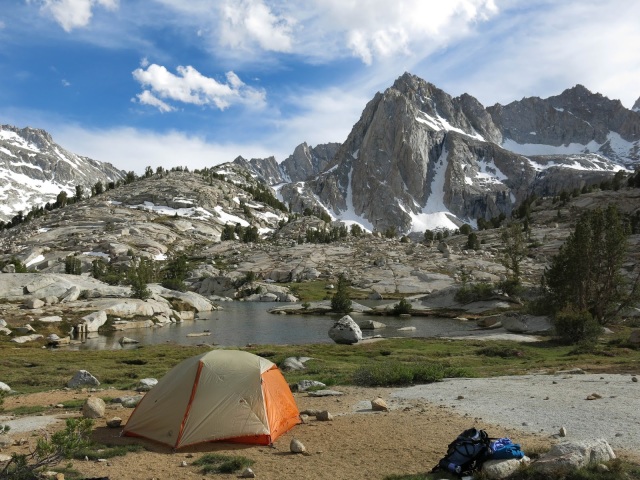 The skies were teasing us. The clouds would clear just enough for a peek of blue, a little sun shining through, then quickly cover up again. Nature’s game of Peek-a-Boo. It was enough to keep us hopeful that Mama Nature would grant us a clear view of the night sky. While hubby scoped out a nearby waterfall for his later midnight meanderings, I relaxed in the tent with a book, enjoyed some yoga on the rocks and pondered the changing of seasons.

As the afternoon began to fade we fell back into that discouraged state. The possibility for a starry sky or even a sunset was looking slim. That’s the thing about Nature and her unpredictable ways. You really have no control and never know which way her mood will swing. Sometimes you have to let go of expectations, make peace with disappointment and simply trust in the experience. So, as we did our best to make our peace, we fixed up some backcountry grub. I cooked up that yummy one-pot enchilada casserole (with black beans this time) and we enjoyed a quiet meal while taking in that picture-perfect view.

As the mosquitos resumed their hovering, we retreated to the tent to await the possible hour of sunset. From time to time, I would take a peek to check the sky for clearing. The light was beginning to fade and so was the hope, as the sky was still so clouded and gray. 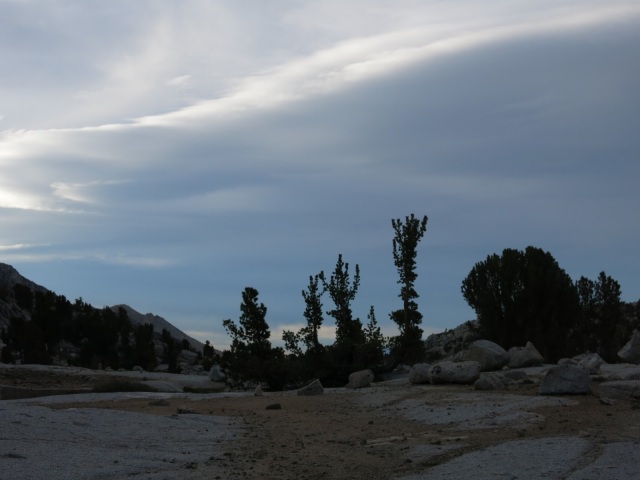 Suddenly, I noticed a shift in the cloud cover. It was as though those clouds were literally being swept away, right before my very eyes. And the light was beginning to change… Look! Quick! Get the camera! Sunset! We dashed out of the tent and down to the water’s edge to watch in wonder this amazing transformation of the sky. 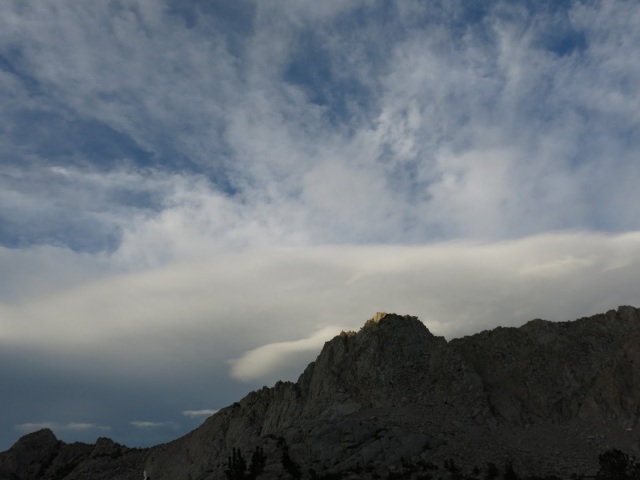 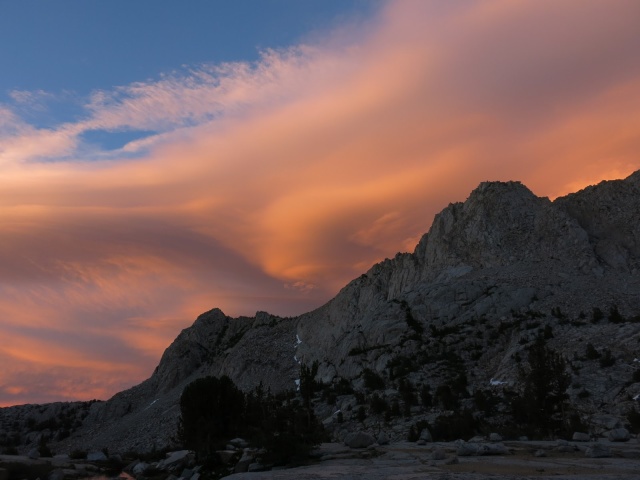 It lasted but a few moments, those sunsets always do. But the intensity, the color, the motion, the reflections…it was magic. Pure magic. And so unexpected.

For some reason nature decided to grant our wish, not only clearing the view, but treating us to such a glorious display, as well. I, myself, felt very blessed to be present for such a moment, a magical celebration of the summer solstice. We could not have planned that if we tried.

As the clouds continued to clear, there was a discernible shift in the mood of the whole adventure. And with the lingering light fading into night, we snuggled into the tent for a cozy snooze before the midnight meandering began. The night was comfortably cool as we wandered in our solitude. We stayed out for several hours, walking, talking, watching the Milky Way travel across the sky. Evan captured some amazing night sky moments, as he always does (you can see more of this nature magic here). I love this one, in particular. There is something about this moonlit waterfall that simply says it all.

Trust in the experience.