I have said it before, some of my tastiest and loveliest meals are those that began with the question: What to do with this?  This recipe for Chickpea Crepes and Artichoke Aioli was an immediate favorite!  It turned out to be a pretty classy dish and it all began with a simple bunch of artichokes from my weekly box of organic bounty.

A few weeks have come and gone since that Tuesday when I found this pretty bouquet of artichokes in my weekly CSA produce box.  It was one of those delightful and unexpected discoveries, a new addition to the regular seasonal crew which we haven’t seen since.  They were so lovely, but still…what do I do with artichokes? 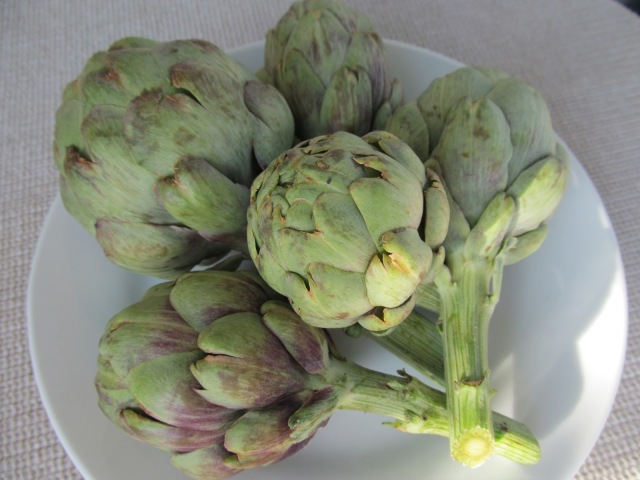 I haven’t eaten freshly steamed artichokes since I was a kid, living at home with my mom.  I used to love dipping the leaves in plain old mayo and scraping the flesh with my teeth.  They were always fun to eat, but as a grown-up, I never make artichokes.  So, when I received this bunch of organic chokes I naturally set out to create something fun.

I started by simply steaming the artichokes and whipping up a simple herbed aioli for which I have no recipe because I just made it up.  A bit of this, a little of that, some more of this…no measuring, no recipe, just toss it together, stir it, adjust to your tastes.  I used a little of my favorite vegan cream cheese, a spoonful or two of vegan mayonaise, some minced garlic, green onions and a handful of freshly chopped herbs.  Oh, and a splash of lemon juice.  And a little salt and pepper.  It was a tasty little appetizer and I felt like I was a kid again, just having fun scraping mayo-dipped artichokes with my teeth. 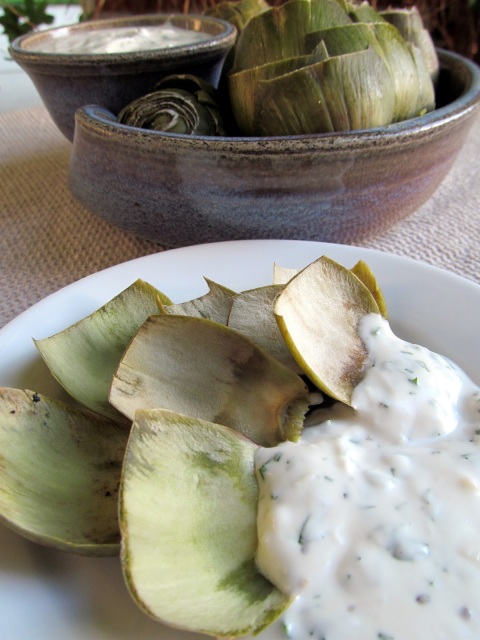 As much as my kidself always loved scraping artichokes with her teeth, it was getting to the heart of it that I enjoyed most.  That was the prize! And sometimes, with all those kiddos having to share, a battle ensued for that one precious artichoke heart.  After savoring my delicious appetizer, I decided to save the hearts for another night…for something special…just not sure what.

I discovered a recipe for Chickpea Crepes (Farinata) stuffed with mushrooms and topped with artichoke aioli.  So, I gave it a go.  This meal was gluten-free, dairy-free, vegan and so delicious!  We loved these crepes and have made them several times since.  The recipe came from one of our favorite and frequently sited cookbooks, Crazy Sexy Kitchen by Kris Carr.  In the book there is a recipe for an Artichoke Aioli made with cashews, which sounds delicious (I will need to give it a try sometime).  However, I had some of my own herbed aioli leftover from the night before, so I dressed it up with some of my precious artichoke hearts.  I chopped them up, added a few to my aioli and set aside the rest for the crepes.

Instead of using the mushroom filling from the book, I stuffed my crepes with some simple veggies (zucchini, red bell pepper, red onion, kale and mushrooms) sauteed in a little coconut oil and garlic.  I topped them off with a generous dollop of aioli, some chopped cherry tomatoes, kalamata olives and a few more artichoke hearts.  New favorite meal.  Simply delicious!

First, I grilled my veggies, chopped my toppings and set them aside while a made the crepes.  For the farinata batter you’ll need:

I didn’t have fresh rosemary, so I used a couple teaspoons of crushed dried rosemary.  (I have since made the crepe batter using fresh organic rosemary from my box and the flavor was amazing!  Maybe even worth a trip to the store if you don’t have fresh herbs on hand.)  You could use a blender to make the batter, but I simply whisked the ingredients together in a bowl.  Add more flour or water as needed to create a thin pancake batter consistency.  I used a small frying pan over medium heat (or a crepe pan, if you have it) with a little vegan butter.  Pour in enough batter to coat the bottom of the pan and tilt the pan to spread the batter.  You want it to be like a thin pancake.  Cook it for a few minutes until it’s golden brown then flip it to cook the other side.  When the crepe is done, set it aside in a covered dish to keep warm while you make the rest of the crepes.  Spoon some of the veggie filling with a dollop of aioli onto each crepe then gently fold it over.  Top with goodies, serve and enjoy!

Have fun with your food.  Enjoy creating your own simply delicious something :)