Day after day, we force our minds and bodies into that workday rhythm. We continually watch the clock as the hour hand dictates our every move. Rise, shower, pack the lunch. Drive, arrive, punch the clock. Dinner, dishes, set the alarm. And so it goes. Tick, tock, task. Tick, tock, task. If we’re lucky, the rhythm becomes an enjoyable one. Even so, we undoubtedly all look forward to those moments when the ticking ceases and nature is allowed to set the rhythm. In those moments, that jarring jolt of the alarm is silenced as we are coaxed into consciousness by the soft whispering light of the rising sun.

I love those moments. I long for them. I love that feeling of being released from the workday rhythm and the freedom of flowing with the gentle currents of nature as though time does not exist.

Such was the case on our recent weekend adventure to explore Death Valley’s Racetrack Playa and the surrounding area. After spending the day pondering the mystery of the moving rocks, we decided to stay the night and explore a bit more of the area the following day. We had, after all, endured all those rough ‘n tumble miles driving in to this remote spot, so we might as well make the most of it.

We couldn’t find anywhere to set up camp near the Racetrack, so we did our best to get comfortable in the back of the car, hoping to catch a few moments of semi-slumber as we awaited the early a.m. hours. We wanted to be up well before the sun, just in case Mama Nature had a spectacular sunrise on her morning agenda. But as we went to set an alarm, we realized we actually had no alarm to set. Fortunately, hubby was tuned in to those soft whispers of the rising sun. His mental alarm woke us just in time to witness the momentary magic of a dawn-painted sky reflected on the dry, crackled surface of an ancient lake bed. 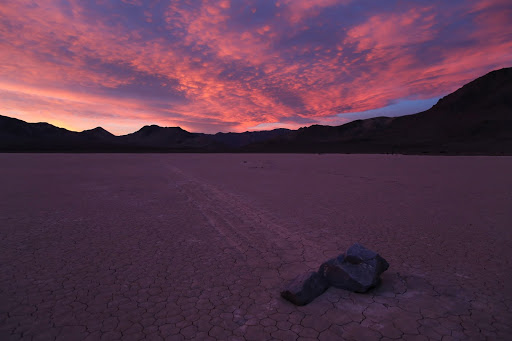 Those vibrant colors of sunrise were quickly consumed by the dull gray of an overcast day. With the mood set, we headed out to spend the day lost in time, meandering through canyons and corridors.

The Ubehebe Mine was just a bump and a tumble north of the Racetrack playa. There, we parked the car and wandered beyond the ruins of the old lead mine into a series of washes that would supposedly lead us into Corridor Canyon. This hidden canyon has long been on our list of places to discover in Death Valley and the route was easy to find with the help of hikers past marking the way. 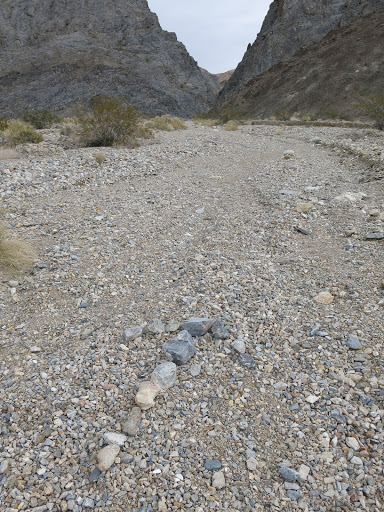 As we wandered the canyons and corridors, we discovered a secret life hidden within those limestone walls. A perfectly posed tarantula, forever paused in travel across a sandy wash. A lifeless butterfly perched on a rock, colorful wings poised for flight. The body of an ancient creature, eternally creeping along the canyon wall. Oddly preserved, lost in time, past and present intertwined. 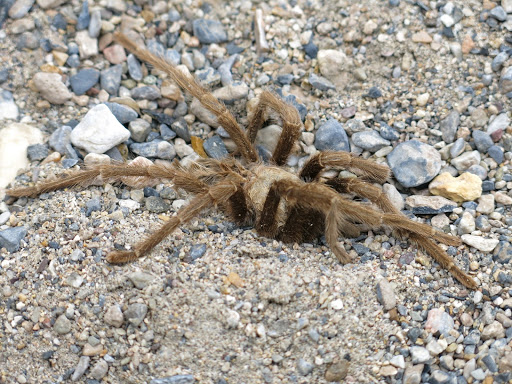 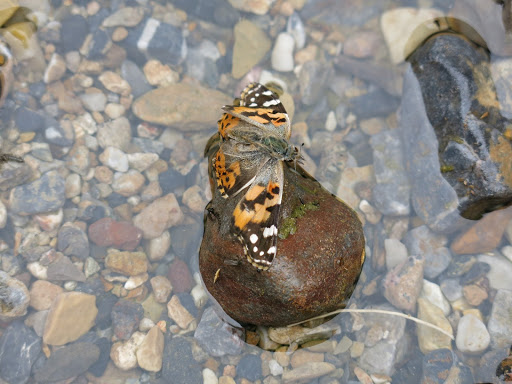 In one area, as we were photographing some petroglyphs on the canyon walls, we found a few little fossils imbedded within the limestone. They appeared to be a worm of some sort, but I don’t know much about fossils. As we looked around we suddenly realized they were everywhere! Entire rock faces composed of a jumbled conglomeration of limestone and petrified wormy things. (Come to find out, they are not worms at all. According to Michel Digonnet’s guidebook, they are “Mississippean crinoids and corals left over from the time Death Valley was a tropical coral reef.” Who knew!) We also discovered one boulder encasing, what looked like, petrified wood. We were fascinated and could not stop clicking the camera. Running my hand along the canyon wall, I was completely awestruck at being able to touch these once living creatures, now forever encapsulated in a wall of stone. Truly amazing. 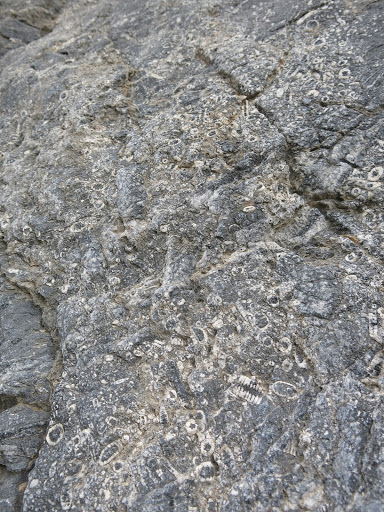 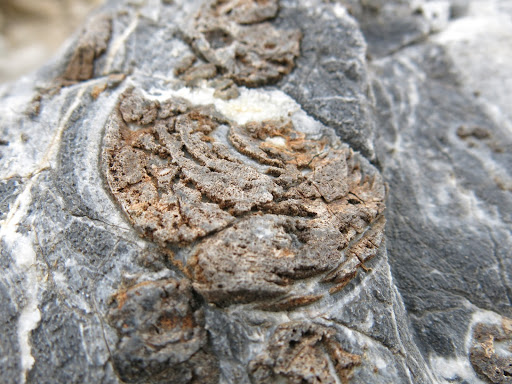 And then there were the petroglyphs that led us to our amazing fossil find. Pictures etched in stone, whispering stories of a long ago life, telling tales from another place in time. Whether made by desert natives or old time miners, they conjured up images of a daily life lived within these corridor walls. There was definitely a discernible spirit about the place and under the watchful eye of of the canyon walls, we spent some time admiring it all. 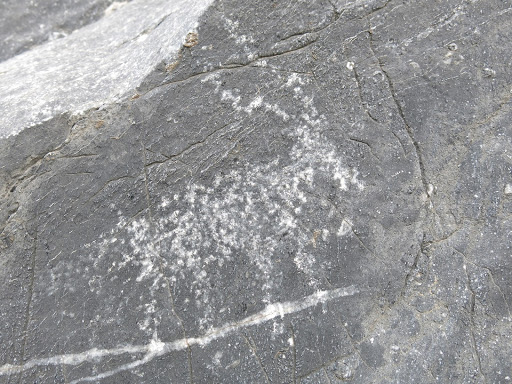 Eventually, amidst our wondering and admiring, we made our way to the dry fall that I will call “the gateway” to Corridor Canyon. Let’s just say, I stayed behind to guard the gate while hubby climbed down the slippery limestone face and explored the Corridor on his own. Still slightly out of sorts from my bout with the flu a few weeks back, I was not keen on climbing any slippery stone walls. Even the thought of missing the actual Corridor, the main event, couldn’t coax me down that fall. I was satisfied with Evan’s images and his description of this secret hallway. 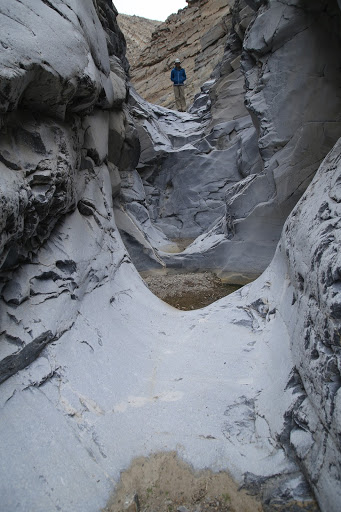 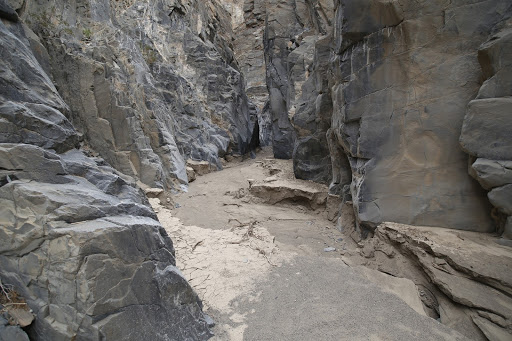 He didn’t stay in the corridor long. The sky was completely engulfed in gray cloud cover and though there was no rain in the forecast, the very idea of water flooding that canyon put a little hustle in his exploration.

We took our time wandering our way back through the canyons and washes to Ubehebe Mine, where we checked out the old remnants of a lead miner’s life.  Isn’t it amazing, this vast, harsh Valley of Death so unexpectedly teeming with life? Isn’t it a marvel, reaching back through time, touching life that once was, watching the transformation of this beautiful planet and all these interconnected cycles of life…and realizing that you are a part of it all? I suddenly had one of those moments. You know. Standing in the midst of something so big and feeling so very small and yet, so connected to it all. In those moments, the ticking stops, time comes to a standstill and that marvelous sense of wonder overwhelms my heart and soul.

Go find yourself a marvel. Be amazed. Let the wonder overwhelm you :)